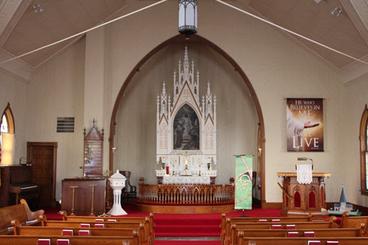 Trinity Lutheran Church traces its roots back to 1869 when evangelists began visiting homes of the first Norwegian settlers in the area. In 1872 the efforts of the evangelists bore fruit when the Bethlehem Lutheran Congregation of Lincoln County was organized. It was established in two districts, the north district around Canton and the south district whose families lived near Patty Slough. In 1875 the Patty Slough district built a church on donated land. This is where the present Trinity Church stands today, eleven miles south Canton in Norway Township. To accommodate a growing membership the Patty Slough congregation constructed a new and larger church in 1893. In 1895 the district withdrew from the Canton district and became an independent congregation. The new name chosen was the Norwegian Lutheran Trinity Church. In 1902 a tornado caused considerable damage and the church was leveled. The organ, bell, and baptismal font were salvaged and put in the new church when it was ready for use in 1904.