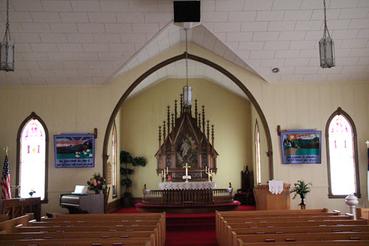 The first meeting to organize what was to become Romsdal Lutheran Church was held on August 1872. During the 1800's members talked of building a church but with the hard times it was not considered possible. In 1890 an offer of land was made if the church were named Romsdal, the name of the giver's home in Norway. The congregation accepted and the church was built in Norway Township. The building was first used for worship at Christmas 1890 and dedicated on July 10, 1892. By 1902 membership had grown and the congregation considered adding onto the church. The plans were quickly set aside when the church was destroyed by a tornado on June 23, 1902. In 1903 a new building was completed and this building serves the congregation today. During the 1920's a basement was added and electric lights were installed, powered by a Delco generating plant.