After the union of three church bodies (Hauges, Norwegian Synod, and United Synod) combined in 1917 this body was called The Norwegian Lutheran Church of America. The three congregations Romsdal, Lands, and Trinity formed one parish in 1919.  Romsdal Church bought one third share of the Moe Parsonage property from the Eden (Hudson) congregation, forming the Moe Lutheran Parish with Lands and Trinity.  That same year, the parsonage was modernized with electric lights, water and sewer.  Equal services were to be held in all three congregations and each would share in the upkeep of the parsonage.  One third of the services were to be held in English.  In 1930 services were to be one half Norwegian, and one half English.  All services were conducted in English by 1935. Today services are held every Sunday at Lands. Romsdal and Trinity share a service alternating churches each Sunday. The summer months, June through August, a Moe Parish Park service is held each Sunday in the shelter and an indoor service is held at one of the churches each Sunday.​​ 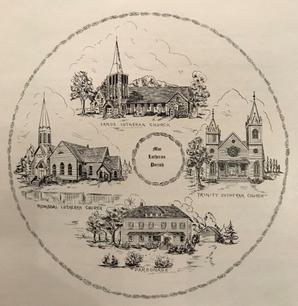