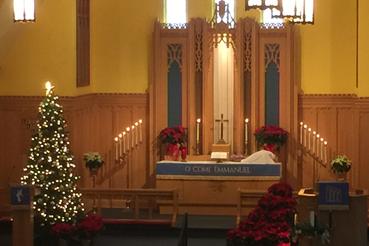 When the first Norwegian settlers arrived in the area, many joined the Canton Norwegian Lutheran congregations. The congregation was so wide spread that it was necessary to divide it into districts. The Lands area constituted the south district, which in 1872 separated from the Canton congregation. Church services were first held in the homes of  members but in 1872 final steps were taken to build a church which was completed later that year. In 1879, a prairie fire turned the building to ashes. The second Lands church was built and ready for services in 1881. In 1890, the parsonage was built and the Moe general store and post office were constructed north of the church. In 1901 the congregation had outgrown the church and a third Lands church was constructed. in 1902 a tornado toppled the steeple of the new church, blew out its windows and damaged the structure. In 1952 the new brick church was dedicated.